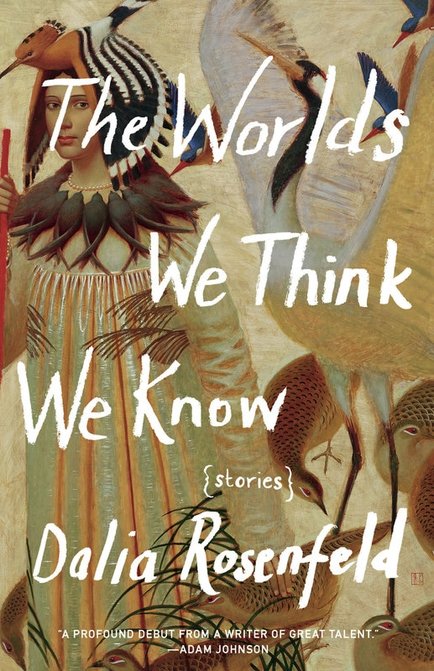 Fiercely funny and entirely original, this debut collection of stories takes readers
from the United States to Israel and back again to examine the mystifying reaches
of our own minds and hearts.

The characters of The Worlds We Think We Know are animated by forces at once
passionate and perplexing. At a city zoo,  a mismatched couple unite by releasing
rare birds. After being mugged in the streets of New York, a professor must  repeat
the crime to recover his memory—and his lost love. In Tel Aviv, a sandstorm rages to
expose old sorrows and fears  as far away as Ohio. And from an unnamed Eastern
European country, a woman haunts the husband who left her behind  for a new life
in America.

In Dalia Rosenfeld’s prose, the foreign becomes familiar and the mundane
magical. The Worlds We Think We Know is a  dazzling debut—clear-eyed, empathetic,
and heartbreaking.

THE YIDDISH LESSON, in Tablet Magazine, 2022
SEEKING ATLANTIS, in Threepenny Review, 2022
MEMORIAL TO VENUS, in Salmagundi (forthcoming)
A RAZOR FOR THE CHILDREN, in Tablet Magazine, 2019
IF YOU DO NOT SHAVE THIS RABBIT, HE WILL GET STONED, in Chicago Tribune, 2019,
reprinted in Tel Aviv Review of Books, 2019
DAUGHTERS OF RESPECTABLE HOUSES, in Michigan Quarterly Review, 2017
INVASIONS, in The Colorado Review, 2015
A FAMINE IN THE LAND, in FICTION, 2015
THE FOUR FOODS, in The Los Angeles Review, 2015
THINKING IN THIRD PERSON, in Agni, 2014
INFECTIONS, in Moment Magazine, 2012
A. MNON, in JewishFiction.net, 2012
THE NEXT VILONSKY, in Michigan Quarterly Review, 2012
FLOATING ON WATER, in Carve Magazine, 2012
SWAN STREET, in Bellingham Review, 2013
NAFTALI, in Jewcy, 2009
BARGABOURG REMEMBERS, in Mississippi Review, 2008
THE OTHER AIR, in Zeek Magazine, 2008
THE CEILING, in Covenant, 2007
THE EASEL, in Midstream, 2006
TWO PASSIONS FOR TWO PEOPLE, in Shenandoah, 2005
CONTAMINATION, in The Atlantic Monthly, 2005
THE HAT, in Tikkun, 1998
THE ENCIRCLING OF YEHUDA HAR-EVEN, in Jewish Education News, 1997
A TIME TO PLANT, in Midstream, 1994